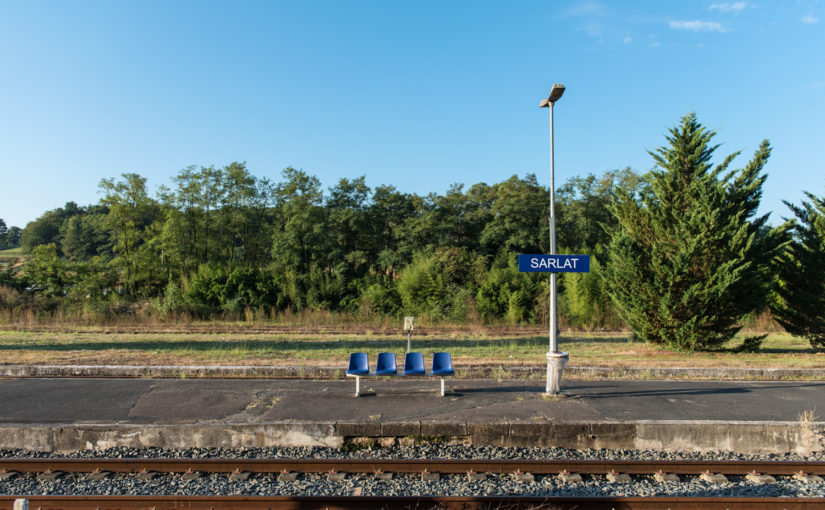 And a few days away from the problems of my fictional photographers.

Hago and Danny arrived for a brief visit and we took off for the Dordogne, which we all knew only from Martin Walker’s Bruno series of detective novels. Bruno’s almost superhuman wisdom, compassion, and perspective are a bit unbelievable, but the sense of place Walker evokes is tremendously inviting, so off we went: TGV to Bordeaux, rental car to our base in Sarlat.

Bruno lives in the fictional village of Saint-Denis, which exists only in Walker’s imagination, but he creates the place with bits and pieces of regional towns including Sarlat, Les Eyzies, Beynac, and Saint Cyprien.

We arrived too late for the Saturday market and left before the Wednesday edition, but there’s no problem finding good food in Sarlat—if you like duck. Magret, dried magret, gizzards, confit, any way you want it.  But there’s also goose, beef, pork, and, thank heavens, fish. They grow a lot of corn around here but most of it goes to feed the ducks and geese; other vegetables make rare appearances, except of course potatoes, which Bruno—who can be found in the kitchen when he’s not chasing bad guys or coaching rugby—fries in duck fat. Just writing this is hardening my arteries and generating a craving for lettuce.

We did occasionally push away from the table and do our touring duty by exploring a cave and boating on the Dordogne River. Cave access is limited. We didn’t arrive early enough to get into our first choice—did I mention the lovely Bergerac wines?—and second place was a letdown. The visible etchings were underwhelming, although my vision may have been less than keen after the third time I hit my head. This is not a great adventure for people over six feet tall with aging knees. The boat ride was more relaxing; I might better describe it as nap-inducing. Not at all a bad thing.

For me, the best parts that didn’t involve eating and drinking were just walking through the villages. There’s a distinctive architectural style of light stone or masonry walls, peaked roofs clad in brown stone tiles and turrets capped with witches’ hats. It’s charmingly traditional and pretty consistent until you get to the main street of Saint-Cyprien.

I cannot explain this. I asked a street sweeper if there was a fête going on and he told me no, that’s on the first of July. So I asked if the town was always decorated like this and he decided to have a little fun with the tourist rube, telling me it was the work of fantômes. I thanked him and looked for the tourist office but it was closed for lunch.

Either the river has overflowed its banks  OR….

We’re looking at a rather unusual production of Swan Lake. 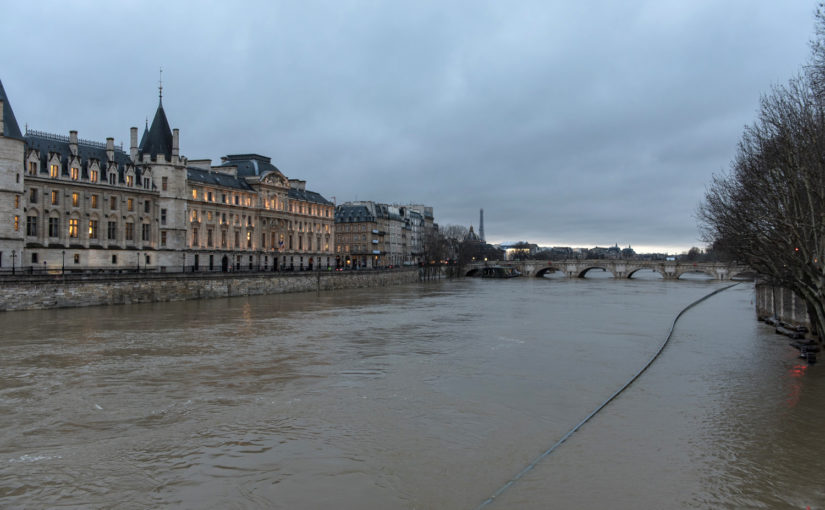 The river is high, about five meters now, expected to rise another meter by Saturday. The embankment is underwater, Métro stations are soggy, nearby RER stations are flooding. None of this is particularly surprising because every day seems to bring some rain. Damp winters are expected but the persistent precipitation this year is extraordinary. But with convenient public transportation and numerous indoor activities, Paris keeps me busy.

I took in a reading by Nathan Englander at Shakespeare and Company. The book was a new novel: Dinner at the Center of the Earth, a tour de force of literary talent with multiple points of view, time frames, and locations, all skillfully woven together into a spy story and a meditation on peace in the Middle East. Or its absence. Englander’s prose is crystalline, his speech, a rapid-fire stream of consciousness that can accommodate four ideas in one sentence. If he wrote as fast he talked, there’d be a new novel every week.

Went to a meeting of Democrats Abroad the other night. It was, as expected, an hour of recounting the horrors of the past year, followed by an optimistic preview of Democratic prospects for the mid-term elections. The most striking, and perhaps discouraging aspect of the evening was the amount of gray hair in the audience. I might be wrong, but I think it possible that I was not the oldest person in the room. I doubt that’s a reflection of the Democratic Party in general, most likely just a function of how many old liberals have been able to retire to Paris.

Now for something I never thought I’d do: I’ve joined a writing group. I’ve avoided them in the past, thinking they were another form of group therapy, something I’ve also managed to avoid, but the need for feedback on a new book that’s been a struggle so far, and the desire to make new friends finally overcame my prejudice. This is a good thing. I like the members, there are about seven or eight regulars: from Australia, England, the US, all unpublished but skillful writers. Their criticisms are never cruel and sometimes helpful, it’s interesting to read pieces of other work in progress, and it pushes me to work harder to bring something new each week. This is causing some changes in my process. On previous books, I blazed through a first draft to the end of the story, then went through multiple revisions. Looking back, I think I never went far enough, needed more multiples of those revisions. The writing group is forcing me to revise and polish as I go along because first drafts are simply too rough for anyone to read. Now I’m revising each chapter down to the sentence level multiple times before presenting to the group. There are still flaws—must give my colleagues something to criticize—but I think working this way allows me to be more self-critical and helps me get closer to the precise prose I’m seeking. And I just read an article in which Zadie Smith talks about a similar approach so I’m thinking fame and major awards can’t be far behind.