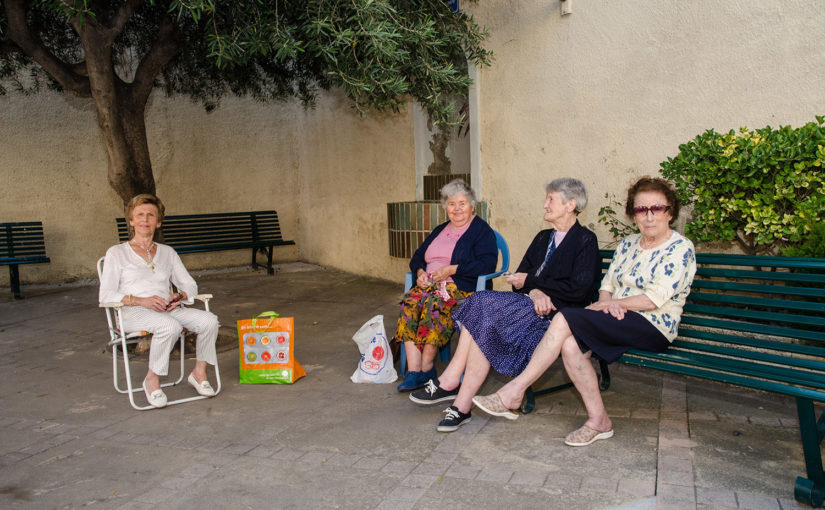 The photo above was made on September 30, 2011 and christened The Olive Tree Salon. The small park is actually the Place du Bicentenaire (1789-1989), but to me it will always be the set for the Olive Tree Salon. The women gathered on warm summer evenings with their knitting, or not, and spent an hour or two talking over their day, exchanging gossip and recipes, and, no doubt, complaining about the ailments of age. Groups of two or three men sat at the trompe l’oeil café or down by the bus stop and I expect their conversations were not very different. Geneviève (left) was the natural leader, as she was throughout town. Formerly the secretary at the Mairie and, as such, a reliable source of information about everything in the village, she is now the head of the Club des Ainés, organizing activities and support for the village’s growing population of senior citizens. But seniors’ groups have built-in population controls and at least two of the members of the Olive Tree Salon have died: Pierette on the right and Lucienne, seated next to her. I’m not sure about Colette but I haven’t seen her since I’ve returned and it’s a small town.

So the Olive Tree Salon is no more but the park is still a gathering place. Houses heat up in the late afternoons and the cool shade of the olive tree welcomes a new generation. The kids are young and energetic—a girl teaches her younger brother some dance moves—the clicking of knitting needles has been replaced by music struggling to be heard from smartphone speakers. Not my music, but a welcome addition to my soundtrack. Like many rural villages, the population of Maury is aging because a lack of local employment opportunities forces young people with ambition to look elsewhere. But there are still kids here. Their lively chatter and hip-hop music adds to my day, brings a smile to my face and a bit of comfort to my night. 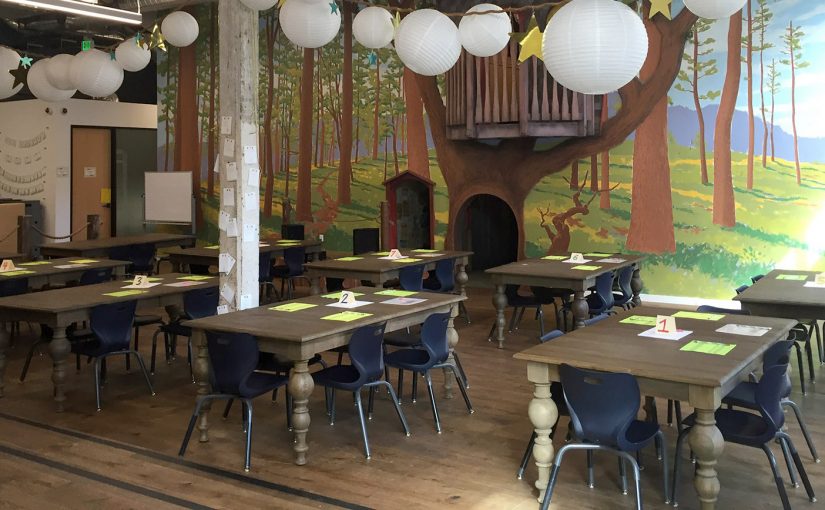 The good folks at 826 Valencia decided to continue a tradition of asking students to write letters to a newly elected president and publishing them in book form. It was one of the writing options this week and one of my kids chose it.

J: Will he answer?

J: Then why should we do it?

R: When you have ideas, opinions, concerns, it’s important to express them. Writing this letter is a way to make your feelings known.

We began by brainstorming using an outline prepared by the staff. The first item was “Tell the President-elect something about yourself”.

He just shook his head.

R: Why not just tell him your name and where you live?

R: I don’t think that’s going to happen. I was trying like hell to be positive.

R: Let’s move on to the next part. What do you want to tell the new president?

R: Good. Let’s tell him why you think that.

J: Because I’m Mexican and Mexicans should be free and I have cousins in Mexico.

R: That’s good. You can write that.

But he doesn’t write.

J: He doesn’t like Mexicans. He says bad things.

R: Do you think all people should be treated the same?

He looks at me and nods his head. My question too dumb to merit a verbal response.

R: Then you should write that. It’s important for him to hear.

But he pulls the hood of his sweatshirt up over his head, then sinks to the table.

I so want to reach this kid.

R: J, it can really help to say what you feel and by writing it down, you let other people know and you’ll find they feel that way too. A lot of people with the same ideas getting together can change things, so being able to speak and write about how you feel is powerful. That’s why you come here to practice writing and this is important to write about.

His head stays down. I don’t know if he’s tired, not feeling well, really upset, or just lazy. I keep trying to reach him but I’m not getting through and we’re running out of time.

Is there anything else you want to tell him?

Yeah, he shouldn’t be president.

Now, more than ever, we have an obligation to help kids like this. Donate, volunteer at 826 Valencia. 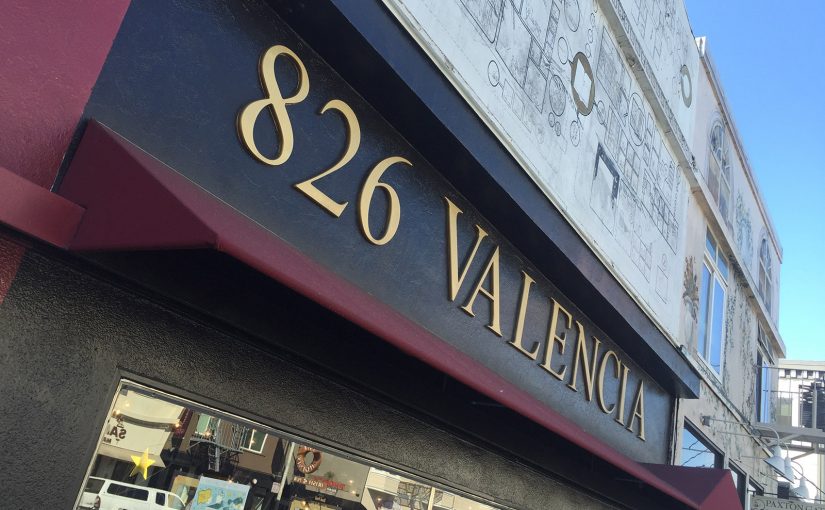 Haven’t spent much time in the Tenderloin – maybe the occasional semi-voluntary visit to the latest funky chic Indian bistro – but then it was drive in, dive in, drive out. But now that I’m volunteering at 826 Valencia’s Tenderloin Center, I’m in by Muni, walking around, working with the kids and walking back to the bus – with eyes open, in the light of day. It’s something to see.

First impression is horrifying: a woman squatting to urinate on the sidewalk, the stream flowing downhill until it meets a sleeping man, open drug dealing, people living and presumably dying on the streets, bags of clothing stashed in doorways already crowded with people, the smells of human waste. The whole panoply of suffering is on display all day long.

But if you’re not here in the afternoons when school lets out, you don’t see the kids. And you don’t realize that families live here, strong, hard-working families who simply don’t make enough money to live anywhere else.

So when the kids get out of school in the afternoon, they walk past all the misery to King Carl’s Emporium in the Tenderloin Center. It’s a store with lots of cool things to inspire adventure and spark the imagination, all personally selected by Carl, a puffer fish who is always around though never seen.

But they’re not here to shop. After a day at school, they settle in to the writing lab for an hour to write stories. It’s a wonderful thing. They write about dogs and pumpkins and wanting to go to Yemen to see their cousins. They write about getting a pit bull for protection, how many pies can be made from a pumpkin big as a house, and the discomfort of sharing your bed with a horse who’s really a cat but takes up as much of the bed as a horse would. 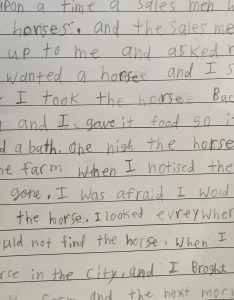 We try to let their imaginations roam while also teaching a bit of structure. We talk about the importance of describing what they’re thinking about, how to build the arc of a story, and a little bit of sentence structure. We correct some spelling errors and throw in a few periods and capital letters. Then they get to play in the treehouse.

826 Valencia, which was founded in 2002 by Dave Eggers and Ninive Calegari is all about helping under-resourced students develop creative writing skills and supporting teachers to inspire creativity in their students. The goal is to smooth the path to academic and career success for kids not born with a wealth of advantages. I hope the kids are getting as much out of it as I am.

I took a walk in the vineyards this evening to record the state of the fruit. I like to go the same vineyard at least once a month to see the changes and understand the process. It’s hot now and we have very young, small green berries with opaque skin. It’s baby wine and it made me think about all the things Maury does for its children. OK, I know that’s a stretch, the truth is there have been all these events for kids lately so I couldn’t help but think about them and then I went for a walk in the vineyards and it all got tossed together in the salad of my brain. I’ve warned you about this before: this blog doesn’t have an editor.

The children are everywhere; if you invite friends to dinner, expect the kids to come too. Parents tell me the school is excellent and they love the teachers. The library (http://www.maury-village.com/biblio/) serves everyone, but Cati has a special emphasis on children and if you go there on a Wednesday when school is all athletics, some of the kids who are not sports minded will be in there reading. She also has a Saturday morning meeting for parents to read to their preschoolers and even hosted a seminar for regional librarians on sexism in children’s books, featuring a prominent expert in the field.

Children are included in everything, they begin the Mass by bringing candles to the altar, Voix de Femmes included several theatrical presentations for kids; they carry the torches for the Fête de St. Jean (accompanied by firefighters). Even the large winter bingo parties set aside some of the games for kids only, with appropriate prizes.

This is one of the nice things about small town life and it’s important that it still exists here. Many small rural towns are dying because there is no economic opportunity, but Maury has the wine and so far, that has kept many of the younger generation and their young children here working in the independent wineries or growing for the cooperative. When I first came here I feared this generational continuity would be lost for two reasons: winemaking is a very difficult way to make a living, and the influx of foreign investment would buy up the best vineyards and drive the locals out of the business.

It hasn’t worked out that way. For one thing, it’s difficult to earn a living anywhere right now and the scarcity of employment may very well have kept some people in the vineyards. Also, much of the acreage that changed hands was scheduled to be torn out because the farmers had retired, and many of the best vineyards remain in the hands of the locals, who continue to make wine and feel they will prosper because of the new attention being focused on the region. And it’s this generation, in their twenties and thirties whose children are filling the school.

Meanwhile, the mayor works for managed growth and a balance between the new investment and family traditions and I have to think that if anyone can make this work, it’s Charley.