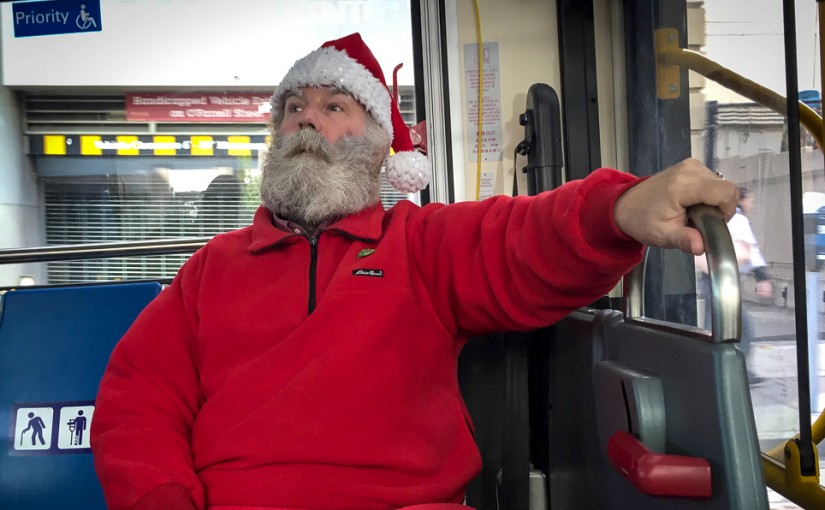 Blame it on MUNI

1} The Christmas Bagel: this is an old tradition but already there’s a problem. There are no bagels here.  So, we’re going to make them. You’ve already made the dough, cut off a piece, roll it out to make a rope then join the ends to make a circle and smooth it out as best you can. If this doesn’t look anything like a bagel, start over. Place gently in gently boiling water. If it doesn’t fall apart, you’re going to have a great Christmas, if it does see item 2. After it boils for a bit (don’t press your luck), gently remove from the water, sprinkle some chopped onion or poppy seeds and maybe a bit of coarse salt and bake it for a while at a really high temperature because Celsius is not as hot as Fahrenheit. When it browns, take it out and let it rest for a bit (I don’t know why, but they tell you that with everything). Slice, shmear with that stuff that looked like cream cheese on the package but turned out to be something else, top with smoked salmon (it’s not lox, it’s nothing like lox, but it’s as close as we can get and that wasn’t real cream cheese anyway). If all this actually worked, enjoy, if not, spend the rest of the day studying French.

2} Bake Bread (if the bagels didn’t work out)

Note: This may involve listening to old comedy records.

Note 2: Bing Crosby was not Jewish

Note: The need for the meds may have nothing to do with listening to Jewish Buddhists.

5} Watch the entire Godfather saga: I suggest starting the download on Christmas Eve and it’s OK if you don’t get through Part 3.

Note: It doesn’t have to be The Godfather but you want to avoid Bing Crosby and movies about the holocaust.

6} Eat Chinese or Italian Food: It is Sunday, but if you’re in Maury where there is no takeout, you need to make a pizza. Take the rest of that dough, roll it out nice and thin, tomato sauce, mozzarella, pork. Bake it on the bottom of the oven as hot as it will go unless you have one of those fancy stones which you don’t.

7} Make Latkes (it’s Hanukkah after all)

Squeeze the water out of the shredded potatoes a few times before adding other ingredients. This is important and don’t worry about it turning brown, you’re going to fry them.  Mix it all together, form latkes in a large spoon. Fry hot, salt, serve with apple sauce. (I don’t like sour cream)

8} Clean out the drawer where you’ve been putting everything that had nowhere else to live.

Note: This may take a while and with all the cooking you have to do, there may not be enough time.

Note 2: When you’ve finished removing everything from the drawer, put it all back. There’s still nowhere else for it to go.

That should get you through the day and then it’s just a week until New Year’s, after which life becomes somewhat normal again and it’s only six weeks until pitchers and catchers report.

Not to be outdone by our trendy neighbors to the north, Languedoc Roussillon has its own fearsome wind, La Tramontane and it shares many characteristics with its more famous Provencal cousin, Le Mistral.

Both are described as cold, dry and violent and when the winds persist they are said to affect the brain as well as the climate. Stay away from the hunting grounds.

Literary references abound: the Mistral of course, shares its name with the great Provencal poet, Frederic Mistral and shows up often in the literature of the region from Marcel Pagnol to Peter Mayle. The Tramontane appears in Victor Hugo’s poem, Gastibelza:

The poem ends with that last line in the past tense (m’a rendu fou), it has made him crazy. In 1954, Georges Brassens turned the poem into the lyrics of a popular song with the same title.

The wind is usually dry, but when it comes with a small meteorological disturbance over the Mediterranean, rain rides along with it. Friday night they arrived together for the first time since I’ve been here, bad timing. I was already feeling a little sorry for myself, having been laid up for the past few days with the annual Christmas cold. This is not your ordinary cold. It always arrives around this time of year accompanied by bouts of self pity alternating with a feeling of exclusion, fueled by fits of Jewishness, unhappy memories and extreme antipathy toward social gatherings of any kind. In other words, time to listen to Leonard Cohen.

And now the wind and rain are battering the windows and rattling the panes and I know I have to close the shutters, something I hate to do. I mean I’m already sick and feeling lonely and now I have to seal out the rest of the world. I’m not usually claustrophobic, but this was a special confluence of circumstances. Closing the shutters could be fine with a warm fire in the fireplace, or a warm woman in your bed, or maybe even a fine Armagnac in a warm snifter. Far be it from me to hope for all three. But I was shut out, left with tea, aspirin and a movie from iTunes. The movie was good: Sarah’s Key with the always-wonderful Kristin Scott Thomas but when it was over the shutters were still closed. Sleep was the only remedy but hard to come by, it was too dark.  I read about half of a Magdalen Nabb mystery, then fell asleep. For about an hour. Read a little more, turned off the light. This pattern continued through the night until I finally dragged myself out of bed around 9:00 and started opening the shutters. It was still windy, but not nearly as strong as last night. There was a light shower, but brighter skies to the east. I went up to the terrace for a broader view and found a better day.

The holiday social scene in Maury is heating up and getting to be more hectic than fashion week in Paris. The bisous are flying and it’s all I can do to keep up.

Tuesday I dropped in on the Club du Troisième Age to get a few pix of a hot bingo session. It was crowded and intense, maybe 75 people in the club HQ competing for bags of groceries. And they come prepared. They have sets of markers, usually with metal rings and a magnetic bar to collect them and keep them at hand. The moderator keeps a crisp pace going while adding a little cultural reference to each number; e.g., 51 is pastis, 89 is Mammie, 90 is Pappi. And they just keep going. I was there two hours and there wasn’t even a break for coffee.

Thursday was outdoor activity day, mushroom hunting which is a competitive sport around here. Ben was my guide and as we were heading to his car a neighbor stopped us to ask where we going. Ben coyly answered that we were just out for a walk but no one was fooled. “Everyone goes to the same places, you just try to get there before they’re all picked,” he told me when we got in the car. There wasn’t exactly a traffic jam in the forest but several cars and a fair number of people with plastic bags, walking sticks and sturdy shoes. But Ben got us into the woods and started my education, pointing out the desired variety barely visible under mounds of pine needles and condition, not too soft or with worm holes and showing me how to ease it out of the ground and trim the stem. When I pointed out the bright orange color staining my hands, he told me that tomorrow I’d also be peeing orange and not to worry. I made one attempt to point out a prize specimen that he had seemed to miss but when it turned out to be a rock I decided to just follow Ben’s lead.

Back in town, we saw Bardot was painting the café kitchen and stopped in for the latest update on the expected reopening. I’ve never seen Bardot without a cigarette in his mouth which was now adding a cool gray ash to the white paint, and his southern accent is nearly impossible to understand but I managed to get “next weekend” accompanied by an expressive shrug which no doubt indicated that one should add “more or less” to that estimate. Since the first rumored grand reopening was November 1, I’ll wait and see.

Friday night Michel and Angelique had a small gathering of neighbors for aperitifs, which around here means sweet muscat and enough food to make dinner impossible. After a delightful couple of hours I went out to photograph the Christmas lights and was almost run down by Richard and Sarah and family on their way to the Grand Rifle, another even bigger bingo fest. This town is getting to be the Las Vegas of the Roussillon. Walking down to the Centre Loisirs, I ran into Vartak who was heading to a concert in Planèzes and invited me along. Sounded good, but I was on assignment in Maury and couldn’t miss the Rifle.

This was a very big bingo event, drawing at least 300 of the town’s 900 citizens and the prizes went up a notch including some very good local wines and fois gras. This was serious business. After numerous bisous, I bought a card making sure it had number 23 on it and found a seat at the expat table. Lady Luck never dropped by.

This morning wrapped up the week with the annual Marché de Noel, a gathering of producers of wine, honey, chocolates and more, along with artisans and sellers of jewelry, DVD’s, clothing, knick knacks and gifts. The Mayor dropped by to shake hands, give a few bisous and spread the seasonal cheer. He manages to be open, friendly and dignified and people are happy to see him. For the kids there was an inflatable castle, face painting and an appearance by Père Noel, everything needed to inspire the magic of Christmas.