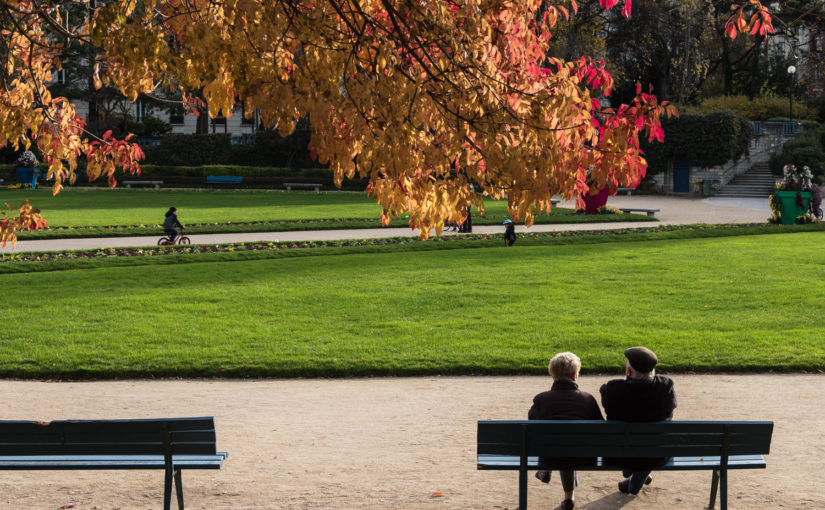 It’s getting dangerously close to real life around here. I found a new doctor, joined a gym, shopped for groceries, and went to the movies in my neighborhood.

But this is Paris and I came here to make sure my life was more than shopping, cooking, eating, and sleeping.  So I stopped by a favorite wine bar last week, did I mention drinking? I ordered a glass of Brouilly and the bartender replied: “Non, non, monsieur, aujourd’hui c’est le Beaujolais Nouveau.” Of course it was. All over Paris were signs proclaiming the arrival of this year’s vintage and I was lunching at ground zero. Tasted pretty good, too. More a testament to the context than the wine, but still.

I jumped into the cultural life of the city when Tia and John, the lovely propriétaires of my building invited me to Paris Photo last week. This is a gigantic marketplace: galleries from around the world displaying and selling contemporary and historical photography create a comprehensive survey of the history of the medium. Two hours was as much as my brain could absorb, but just being there made me feel part of the city.

Then I got carried away and booked tickets for a futuristic La Boheme at Bastille. I’m not sure what to expect—the only image I’ve seen looks like a spaceship has crashed in a snowy forest— but Dudamel is conducting and I can always close my eyes, listen to the music, get off the spaceship and return to Paris at the beginning of the twentieth century.

This all followed a propitious return to the city. I rented a van to haul my stuff and what Jess had stored in our house and as I approached the city, a rainbow appeared. No kidding. A rainbow. I’m not making this up and it gets better. We unloaded at her house, drove across Paris to my apartment where I found a parking place in front of my house just as the clutch gave out. Couldn’t drive another meter. When I finally reached the rental company they told me not to worry, those Renault vans are famous for faulty clutches, and they’ll send a tow truck.

So I’m getting there. The bureaucratic details are being ticked off my list, I have a comfortable work space in my little house, central heating, a good baguette only a block away, and all of Paris within minutes on the Métro. I’m home. 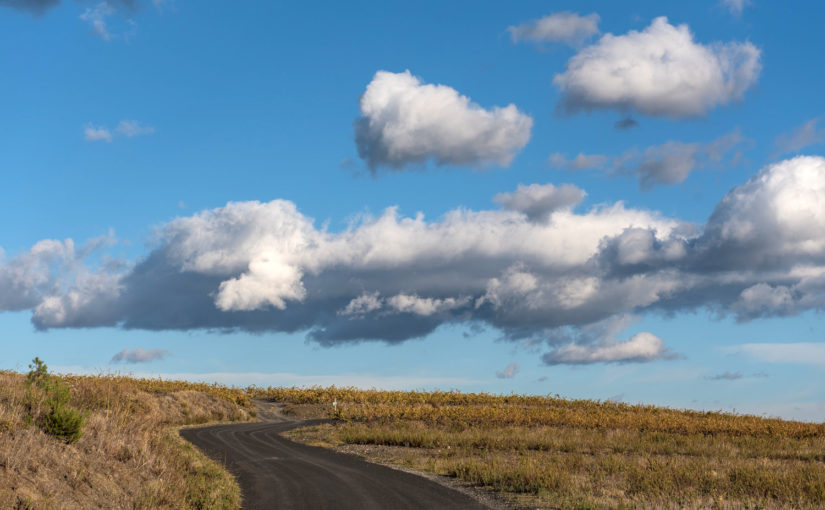 I never planned to spend the rest of my life in Maury but when I came back in March, I thought I’d live here for a few years, save lots of money, then move to Paris. I knew what I was facing, the town would not have changed much from five years ago, but that intrigued me because I had begun work on a rewrite of my novel about that time and planned to write now from the perspective of today as well as of that time: to report on what really happened and comment with five years of hindsight. Being here could only help, but I’m now far enough along that future revisions won’t require geographic proximity.

As temperatures began to drop, and posters for the next Bingo night began to appear, I started to look north. At first, finding a place to rent in Paris appeared to be a task of insurmountable complexity. I contacted everyone I know with any connection to the city but failed to turn up a lead. I worked my way through hundreds of ads throughout the city and learned that the good ones go fast. I would have to be there to jump on something quickly, a five-hour train ride might cost me the place of my dreams. Well, probably not, my dreams are bigger than Paris apartments—that’s why the cafes are crowded—and kitchens are almost an afterthought—that’s why there are two bistros and a brasserie on almost every street. But I wasn’t going there to sit at home, but to be part of this city that I’ve always loved, despite the fact that more often than not, I’ve been there in unhappy times. San Francisco and Paris were the only two places I could see myself living and the remarkable news is that rents in Paris are about half of what they are in San Francisco. I could make this work.

I spent a lot of time looking at ads and learning my way around the numerous agencies and aggregators online. I booked a trip and when I tried to start making appointments I got a wake-up call. Before I would even be allowed to make an appointment I would have to submit a complete dossier which consists of references, letters of employment, and pay stubs showing income of three times the monthly rent. Or, I could provide a guarantor who is French and has the same credentials. Or, as a last resort, some owners would accept a year’s rent paid in advance. Maybe I couldn’t make this work.

Then, for some reason, Craig’s List popped into my head and there it was: a small house in a courtyard of the 15th arrondissement. I responded immediately and the owner was positive but said she had four appointments booked and how soon could I get there. I was still five days away from my scheduled trip so I called a Paris friend and asked her to go see it. She attested to my sterling character, her boys poked around and asked questions as if they were going to be living there, the owner was charmed and now I was real to her. She checked out my blog and said she would wait to meet me before making a decision. I got to Paris about 4 PM on a Sunday, we had a deal by 5, and I moved in Tuesday for ten days before returning to Maury for a couple of weeks to pack, sell my car and close the house.

I’ll be back from time to time to see the few friends I have here, to visit with the Walkers when they come and, I hope, to work on another book with them. But I don’t belong here. I’m a city guy and the thought of living in Paris after so many years of dreaming about it is perfectly right. 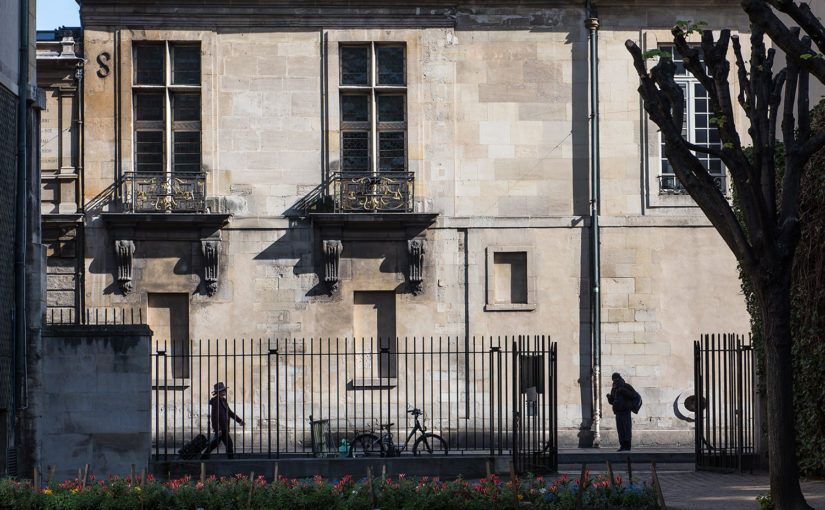 I can’t walk two blocks in this city without stumbling into someone’s photo- op.

Paris hasn’t changed very much. Armed soldiers on guard at major monuments but no one seems to be paying much attention to them. Parisians go about their daily business and populate the cafes after work as they always have. The crowds seem younger but that’s probably just my aging perspective.

I’ve been looking at the ads in the windows of realty offices and while it’s hard to tell much about what’s really available, it appears that rents are just a little more than half as much as San Francisco apartments. I saw what looked like a lovely large studio on the Rue Jacob in the 6th for €1250 per month. If such places truly exist, I’ll seriously look at moving here. Always loved it, always felt at home here. Carried that a little too far yesterday when I gave some tourists very iffy directions to the Pompidou Center in my best French accent. They may have found it by now.

A few noticeable changes: there seems to be an alarming proliferation of bagel shops, and it appears Prius taxis now outnumber Mercedes. I haven’t found a connection yet, my investigation hindered by a preference for baguettes and the Metro, but I will continue independent observation and check in with David Lebovitz on the matter. 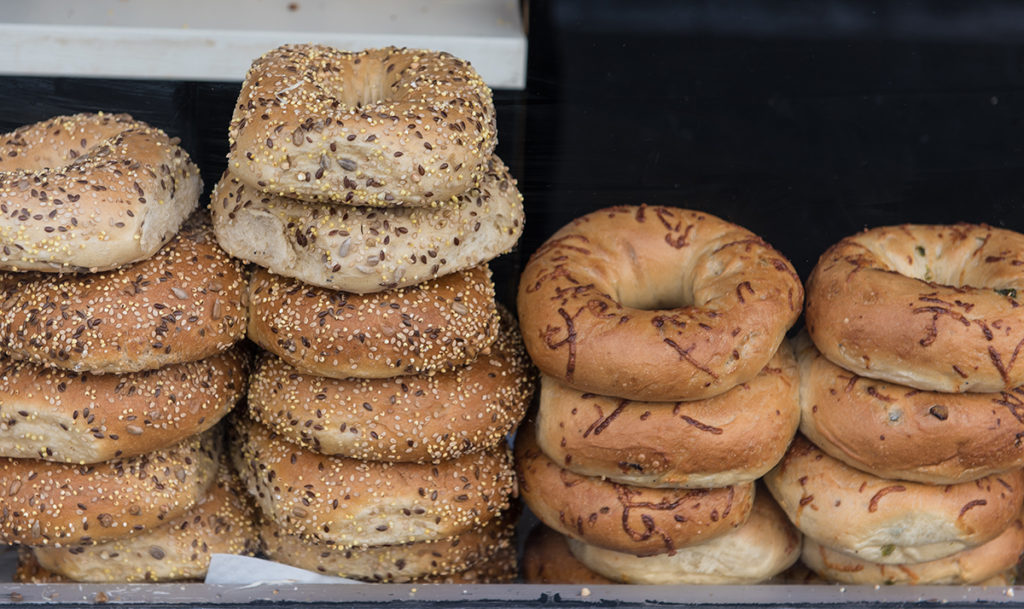 I take this picture every time I come to Paris. From the same spot on the Pont des Arts, different hours of the day, different times of the year. It always pleases me but always seems to lack a special quality of light that define the best images of Paris. Henri Cartier-Bresson has a version that’s really special. I’ll keep trying. 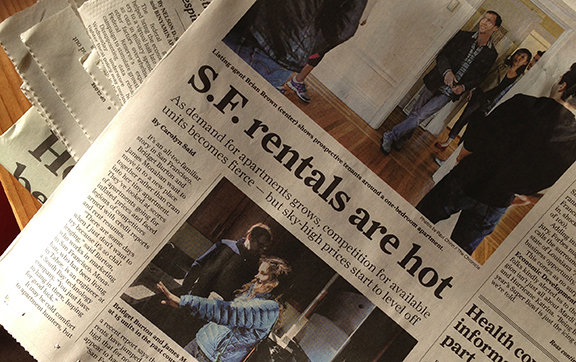 In yet another example of my spectacular gift for good timing, I’ve returned to San Francisco at the peak of an apartment shortage: highest average rents ever and fierce competition for what’s available. Rental ads list proximity to Google and Apple shuttles and warn you to come armed with all three credit scores, bank statements, pay stubs rental history, references and the name of the surgeon who will remove your right arm for use as a security deposit.

This is truly a nightmare. Think for a moment about 300 square foot studios in dodgy neighborhoods for $2000 per month. There, you didn’t need to think for very long, did you? But if you’re looking to live here, you have to consider it.

I went to look at a place the other day that was a steal at $1900. I’ve seen prison cells that were larger. What was called the bedroom was a windowless cube that could accommodate a queen-size bed, but absolutely nothing else, so I’d have to crawl into the room from the bottom of the bed because there was no space on the sides. Then, I’d need to fit living room, office, dining room and clothes storage into the other room, which didn’t leave any space for me. And I put in an application and didn’t get the place. 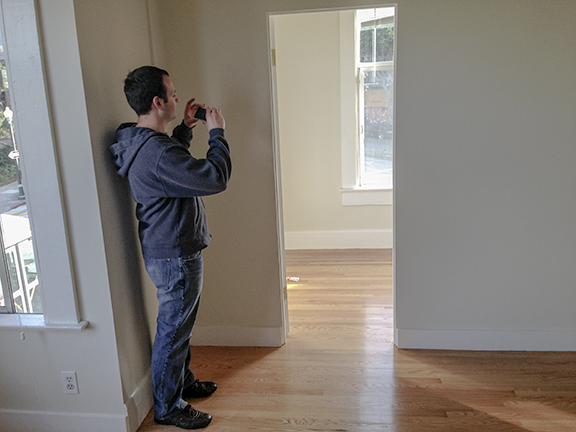 Then we have the guy who wanted to break his lease but didn’t want to tell his landlord yet because he might change his mind, so he puts an ad in Craig’s list offering to rent an apartment that he had no right to rent and wastes half a precious day of searching.

Scams are plentiful and sometimes clever: there are many excuses for not being available to actually let you see the apartment before forking over the “holding deposit.” Some are unavoidably detained on business in Zurich, others have been called to do the Lord’s work in Alabama, in some cases the photos shown are not of the actual unit available, and then there’s Stacy for whom I always seem to be second choice: “The good news is that the rental is still available! We had a tentative agreement from the first person we showed it to, but now it seems that they changed their mind, so we need to lease it as soon as possible. You were the second one to email me about it, so its only fair to give you the first shot.” And to rise to the top of Stacy’s list all I need do is click on the mystery link below.

The search goes on but there are few open houses today because the local boys are in the Super Bowl. I can use a breather.